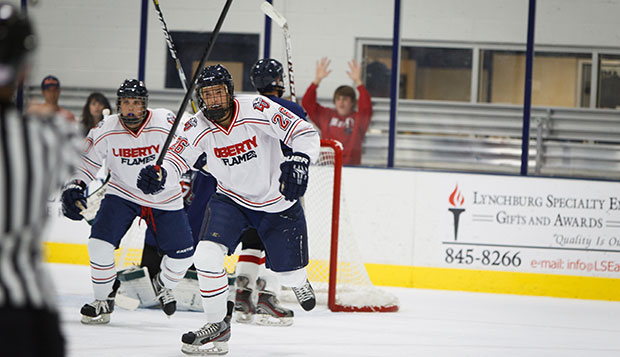 "We've played pretty solid competition and have not had any letdown games," Liberty Head Coach Chris Lowes said. "We're right where we would want to be this far into the season. When we've had to play from behind, the guys just seem to have a calm and a confidence, a good presence on the bench. It's encouraging that the guys play that well when we're trailing."

A key to the Flames' success this weekend was their play on special teams, as they finished 6-for-6 on the penalty kill and 4-for-10 on the power play, including three on Saturday.

Against Rider, Liberty scored five unanswered goals in the second period to turn a two-goal deficit into a three-goal lead.

"When we get rolling, we score in bunches," Lowes said.

The Flames netted their next two goals on deflections with Devon Docksteader tipping in a shot by Paul Ingles off an assist from fellow junior forward Ben Freymond on a power play with 8:46 to play in the second before Bierema tipped in a shot by sophomore defenseman Sean Bakker set up by Garland with 5:13 left in the period. Then, with 29 seconds left, Docksteader finished feeds from Kazmierczak and Freymond to push the advantage to 5-2.

"That was a dagger," Lowes said.

However, the Broncs battled back to pull within 5-4 on two goals in a span of just over a minute midway through the third before Liberty killed a penalty and put the game away with two power-play goals by Garland — on a five-on-three assisted by tick-tac-toe passing from Docksteader and Freymond and a putback of a shot by junior defenseman Ryan Sidun assisted by Freymond.

Delaware scored in the opening five minutes of Friday night's game before Dinnison knotted the score with 7:30 left in the first period off an assist from Kazmierczak. Garland then finished a feed from Freymond on a power play with 2:08 to go before the Flames added second-period scores by Garland, assisted by sophomore defenseman Adam Gnatowski, and Docksteader, set up by Freymond, who added a goal and an assist on a score by Bierema in the third.

"One thing we keep seeing is our depth of scoring from our top three lines," Lowes said. "Garland's line scored three goals against Delaware and had four goals today against Rider. We're starting to see that chemistry coming with better execution."

Sophomore Connor Carew started in goal against Rider after freshman Blake Scott got the win between the pipes Friday at Delaware.

"They provided solid goaltending, making some big saves against some dangerous scorers," Lowes said. "They're getting more comfortable back there and more vocal with their defensemen."

This Friday at 2 p.m. and Saturday at 11 a.m., the Flames will host Penn State and Rider, respectively, in rematches of road wins as they celebrate Homecoming at Liberty a week late.