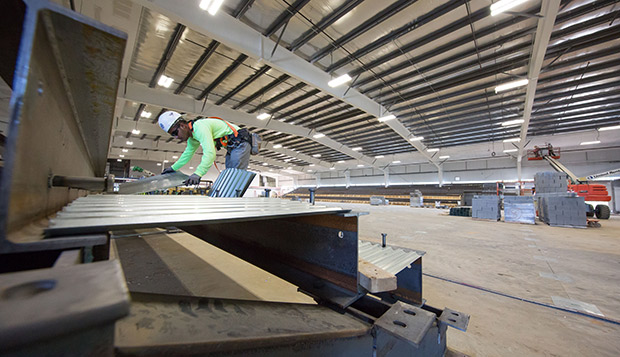 Ongoing renovation and expansion of the LaHaye Ice Center, home to Liberty University's hockey and figure skating teams, is right on schedule.

The 10-month project, started in March, is being completed by Lynchburg-based Glass & Associates, Inc., the same company that built the original structure in 2005. Glass also built the Hancock Welcome Center in 2012 and the Vines Center practice facility in 2013 before expanding the nearby LaHaye Student Union last year.

"Glass & Associates has worked really hard at getting the plan together and they're doing it strategically so that they can stay ahead of the game and make sure that it gets finished on time," said Dave Semenyna, assistant director of Club Sports who oversees all of its facilities.

The Flames ACHA Division I men's hockey team will host the first game in the renovated rink, Oct. 23 against Davenport,  the opener of the annual Blue & Gray Cup. The construction project is scheduled to be completed in time for the start of the spring semester in mid-January, 10 years after the original ice center was dedicated during a grand opening ceremony attended by Jerry Falwell, Sr.

"So far, in the first 10 weeks, there's been a lot of tear-down and they're starting to build it back up," Semenyna said. "They've just poured concrete on the bleachers and will be doing that on the new upper deck and concourse areas (on Saturday). Then, they can start closing in the ice rink, so it can be ready for boards and ice (for tryouts) in August."

The LaHaye Ice Center, which also houses Liberty's Club Sports department and its Hall of Fame, will have a similar exterior appearance as the LaHaye Student Union's Recreation and Fitness Center, located across the parking lot.

Renovations will expand the nearly 60,000-square-foot facility by 30,000 feet, allowing for larger tournaments and three times as many spectators — in close to 1,000 chairback seats, standing-room-only areas in the student section and around a spacious concourse, and 10 private suites, which have nearly sold out for the Flames' 2015-16 ACHA DI men's hockey season.

"The coolest thing is going to be the bleachers because there's going to be more seating and better sight lines," Semenyna said.

Other features of the renovated facility include larger concessions stands and expanded locker, weight training, and athletic training rooms. Liberty's figure skating and synchronized skating teams will have a permanent locker room with space for at least 50 student-athletes, more than doubling the size of the previous facility.

"Everything's going to get an upgrade," Semenyna said.

The Flames' five hockey teams will rely on fans to flood the arena on a regular basis on Friday and Saturday nights from the end of October through the beginning of March. Liberty's ACHA DI men's schedule will feature 19 home dates, about the same as its ACHA DI women's team, the reigning national champions.