Wilson traveled to CFAW from L.A., fell in love with Liberty 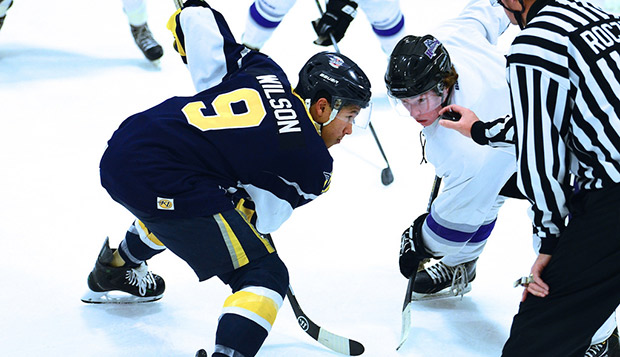 Ray Wilson played center and took the majority of faceoffs for the Valencia Flyers, and will likely do the same at Liberty.

Randazzo, who steered freshmen forward Luke Simon and goalie Josh Halpenny as well as sophomore forward Grant Garvin to Liberty last summer, encouraged Wilson to make a cross-country trip — from Los Angeles to Lynchburg — to attend the April 9-11 College For A Weekend, which coincided with the Flames' annual Hockey Recruitment Camp. Wilson participated in that camp, held in Charlottesville due to the ongoing LaHaye Ice Center expansion, and made a positive first impression on Liberty ACHA Division I Head Coach Kirk Handy, who extended an invitation to join the Flames' top squad this fall.

"When I visited CFAW, it was warm and welcoming," Wilson said. "As soon as I got there, I fell in love with the atmosphere on campus and the coaching staff and they liked my style of play. I'm very blessed and excited for the opportunity to skate with them … and to call Liberty my home for the next four years. I feel like I can help the team chase down (an ACHA DI) national championship. It's going to be a great season. It's going to be awesome."

Wilson, who's now 21 and began his ice hockey career at age 12 after playing roller hockey from the time he was 6, played for the Boston Bandits Junior "A" team from 2012-14, scoring 20 goals and adding 25 assists his first season.

"When I moved up to Boston, I fell in love with the cold weather and envisioned playing somewhere on the East Coast," he said.

Wilson considers himself an all-around player, who works just as hard on the defensive end as on attack.

"I bring a lot to the ice," he said. "I like to lead by example and to get fired up and get the boys fired up before I go out. If the coach tells me to lay the body out, or if he tells me to score a goal, I basically I do whatever it takes.

"Physicality is something I enjoy about hockey," he added, though he is only at 5-feet, 11-inches, 180 pounds. "I like to use my stick handling to score some, and to pass the puck as well. I usually have about the same number of goals and assists."

Wilson will be relied on to help the Flames win faceoffs, one of his specialties, especially now that senior forward Lindsay LeBlanc is graduating.

He plans to work hard to earn playing time and excel both on the ice and academically, where he must decide between pursuing a government, business, or engineering degree.

"My parents didn't go to college and neither did my two brothers and two sisters," Wilson said. "I have a really tight family. We're very close, with great parenting. I'm the baby of the family (but) they taught me how to be a man. They're very proud of me."

He hopes to make a smooth transition from the WSHL to the ACHA and make his teammates and coaches proud as well.