Flames second to No. 1 Hokies at East Coast Championships 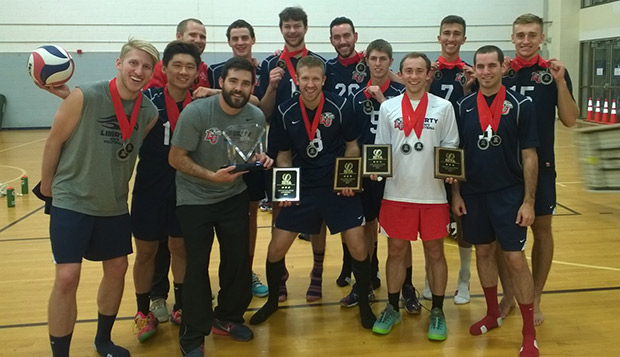 A year after qualifying for the EIVA East Coast Championships Division I tournament for the first time, when it failed to make it out of its pool and into the playoffs, Liberty University's men's volleyball team reached the championship match of Saturday's 12-team event, hosted by Penn State University.

One week after playing Virginia Tech — the top-ranked team in the National Collegiate Volleyball Federation (NCVF) Division I rankings — competitively in the final round of pool play and the championship match of the Eastern Intercollegiate Volleyball Association (EIVA) South Division I tournament, the Flames pushed the Hokies to their limits in their third meeting of the season, a 25-23, 25-22 setback.

"We upset three teams and beat four of the five ranked teams we faced," Liberty Head Coach Bryan Rigg said. "We did better today against Virginia Tech. Both games today went right down to the wire. I think we're in pretty good company with Tech right now."

In the third and final round of pool play, the Flames lost a three-game match to Syracuse, 25-17, 15-25, 15-8, to slip into a second-place tie with the Orange in their four-team pool. The two teams played a one-game tie-breaker to determine which one qualified for the six-team playoff, and Liberty prevailed, 25-17, to advance as the No. 4 seed.

The Flames then swept 12th-ranked Maryland, 25-19, 25-15, in the quarterfinals to set up a semifinal showdown with 10th-ranked Rutgers, a rematch of the Spike at Midnight showdown played Jan. 30 in the Vines Center. Liberty lost that match in five games, but turned the tables on the Scarlet Knights in Saturday's semis, rallying for a 19-25, 26-24, 15-10 triumph to set up a championship bout against Virginia Tech, which ousted PSU in the semifinals.

"That match was just as close as the one in the Vines Center," Rigg said. "Both teams are real familiar with each other's tendencies. In Game 2, we were down 20-12 and the guys fought back, went on some big runs, and won 26-24. That was a big turning point for us."

Junior libero Josiah Williams — who was named to the East Coast Championships All-Tournament Team along with graduate student, opposite hitter, and fellow team captain Kevin Snyder — sat out the first game of the Rutgers match with severe cramps in his legs.

"About three-quarters of the way through the day, the muscles in his legs started balling up in cramps because he had played so many games," Rigg said. "He sat out for one set, ate some bananas and got the trainer to work on his legs and came back for the last two games."

His return was pivotal in the Flames pulling out the rematch with the Scarlet Knights.

"The big difference for us is when we play defense," Rigg said. "We beat Maryland with blocks, passing, and our overall defensive effort. Even against Virginia Tech, the thing that kept us in it was the middle blockers, Sam Eisbrenner and Luke Werth, along with (freshman setter) Nick Williamson, whose distribution of the ball was excellent."

Snyder, Liberty's leader in kills, was complemented by the outside hitting of sophomore Si Hershberger as well as the Flames' middle hitters, who were going back and forth between blocks and kills.

The second-place showing at the East Coast Championships should elevate the Flames in next week's NCVF rankings and bolster their seeding for the NCVF Collegiate Club Volleyball Championships, April 9-11 in Kansas City, Mo., after competing in Division I of that tournament for the first time and placing 34th in Reno, Nev., last spring.

"The next national ranking comes out April 1," Rigg said. "We should move into the top 15, and if we can get into the top 12, that will give us a No. 1 seed in Division I at nationals, where there are 12 pools of four teams. Last year, we came in ranked 43rd, so to go from the bottom of the pool to the top of the pool, that's a big step for us. We're making big leaps and bounds as a program."

Currently, there are 10 teams from the EIVA ranked in the top 20 of the NCVF poll.