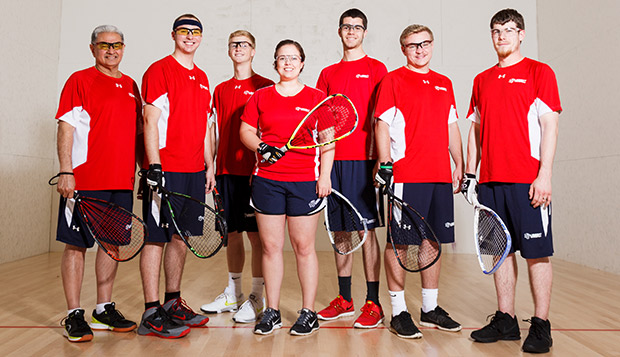 "We have five players and two coaches going and for all of us, this is our first time at nationals," said Schreck, who will play at Division 1 singles and doubles with junior Eric Piering, the Flames' Division 2 singles player. "It will definitely be tough because at nationals, there are six skill divisions and if you bring a team, you have to have at least one player per division (starting at No. 1). Facing new players and different styles, it will be interesting to see how people will play. I'm confident I can compete."

Placing in the highest bracket — where he will challenge the equivalent of professional players, including many on scholarship from teams out West such as the University of Colorado — will be a tall order.

"The thing about racquetball, by the time you get to the Division I skill level, any match is anyone's game," Schreck said. "If you make a mistake, your opponent can capitalize on it. Every day is different and it depends on who makes fewer errors in that specific match."

A computer science major, Schreck enjoys the technical aspects of the sport and the angles involved in high-speed match play from inside a rectangular box.

"Knowing when to hit which shot based on where your opponent is standing is a pretty big part of racquetball," he said. "You always want to make your opponent run to the ball. If I'm facing an opponent who's quicker than me, I try to hit more calculated shots. If I'm playing against opponent who's slower, hitting more powerful shots can be more effective."

Liberty sophomore Alex Ecker and senior Phillip Brown will team up at Division 2 doubles with Ecker also playing No. 3 singles and Brown No. 4 singles. Senior Kawin Barnes will represent the Lady Flames in the women's Division 1 singles bracket.

"We don't know what to expect, but our guys are pretty good and we're hoping they can place," Liberty Head Coach Danny Rodriguez said.

Schreck, who moved up from Division 3 to Division 1 this year, credits Rodriguez and his assistant coaches — Shawn Furman, a former No. 1 player for the Flames, and Charles Billingsley — for developing the players' skillsets.

"We have some of the best coaches in the Mid-Atlantic Collegiate Racquetball Conference (MACRC)," he said, noting Rodriguez and Furman were named co-conference coaches of the year although the Flames placed second to the University of North Carolina in the regular-season team standings. "Our coaching staff is remarkable, the way they can teach a beginner to play at a high level in a short period of time."

Rodriguez and Furman flew with the team from Lynchburg to Charlotte, N.C., to Phoenix on Monday, and will have the opportunity to interact with players during three, 30-second timeouts per match.

Even if Liberty's players are eliminated from bracket contention, they will gain valuable experience from witnessing the high-level tournament firsthand.

"Watching people that are better than you is one of the best things you can do," Schreck said.

When players lose, they are assigned to help officiate matches for the rest of the tournament.

"It's all about being a good sport even when you lose, having integrity and making sure you call the right calls," Schreck said.

ASU's courts, like the new ones in the LaHaye Student Union, have clear glass walls, making matches more spectator-friendly, but somewhat more distracting for players involved.