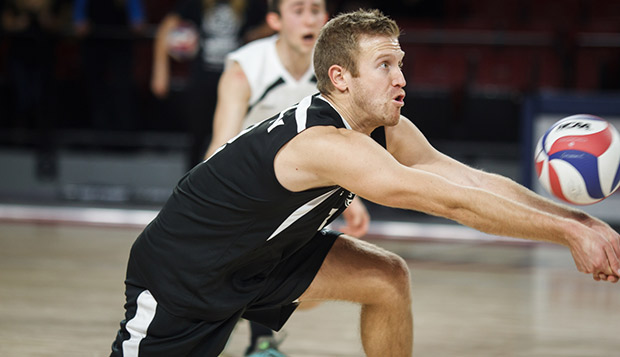 Flames opposite hitter Kevin Snyder, shown making a dig in a recent match, led Liberty in aces and kills on Satuday.

Liberty University's men's volleyball team cruised through its pool and advanced to the championship match of the Eastern Intercollegiate Volleyball Association South Division I tournament, Saturday at George Mason University.

"It was a great day," Liberty Head Coach Bryan Rigg said. "Early in the day, we got our whole team involved and didn't have to play many of our starters, and late in the day, we got to play Virginia Tech. Both the first sets were really tight, which was a confidence booster and really exciting for us."

By placing in the top two out of the 10-team field, Liberty clinched its second straight trip to the East Coast Championships, next Saturday at Penn State University.

This was the first time this season the Flames had faced either the Hokies or the 30th-ranked Dukes.

"In the semifinal match against JMU, we struggled," Rigg said. "It was a matter of getting over our mental hurdle. We lost the second game before pulling out the third, although we were down."

"Offensively, he had a run of service aces against Virginia Tech and JMU," Rigg said. "His serve was on today. That was a big bonus for us."

"They were dominant on the offensive and defensive sides of the net today," Rigg said.

Sophomore setter Nick Williamson, who, like Hershberger, recently returned from an ankle sprain, orchestrated the offense.

"Nick did a great job distributing the ball," Rigg said. "He was leading the team on the court, directing the offense and encouraging the guys."

Liberty senior Ethan Chase complemented Snyder at the opposite hitter position while junior libero Josiah Williams showcased his passing and defensive skills, even after tearing a tendon in one of his fingers and playing with it taped up.

"Josiah had a great game," Rigg said. "His passing was excellent. His defense was great."

Williams received All-EIVA Division I honors as the first-team libero while Snyder made the squad as the league's top opposite hitter. In skills voting, Williams was selected as both the EIVA's most efficient passer and best defensive specialist.

The top four teams from each of EIVA's three regions will be represented at Saturday's East Coast Championships, where the Flames will enter as the No. 2 seed out of the South and be placed in the same bracket as the No. 1 team from the North and No. 3 squad from the Central.

"The last national ranking before (the NCVF) Nationals comes out after East Coast (Championships)," said Rigg, who hopes to move into the top 15 with a strong showing at PSU. "Our ranking should go up as well as our seeding for the national tournament if we can do well up there."