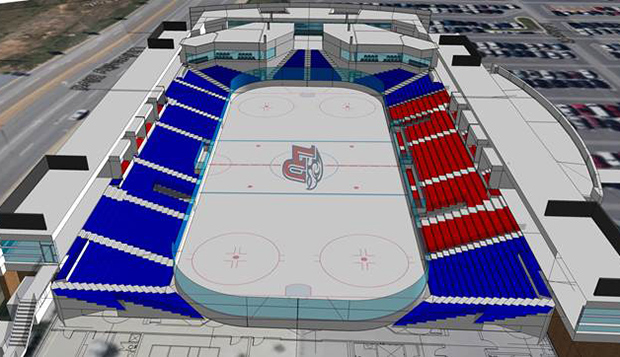 The expanded arena will double the seating of the current facility.

Members of Liberty's Club Sports department announced plans for the expansion of the current 45,000-square-foot facility during a special meeting on Thursday with various coaches and student-athletes.

"This is a real exciting day for Liberty," said Kirk Handy, senior director of Campus Recreation and ACHA Division I men's hockey head coach. "In 2006 (when the facility was built), never in a million years did we ever dream that we'd be here today again looking to upgrade our facility. This is a gift from God. The ability that God's given us as a Club Sports program at the university to be able to do this is a huge blessing, and we're very thankful for that."

The front and sides of the building will be expanded to allow for three-quarters bowl seating for 3,200 spectators — more than double the seats in the current facility. Plans call for 1,000 chairback seats, plus 10 overhead suites and standing-room-only areas around the second-floor concourse.

In 2006, Liberty only had one men's and one women's hockey team, representing 45 student athletes. By 2010, the university became the first in the nation to feature hockey teams at all five levels of the ACHA — DI, II, and III men and DI and II women.

The ice center is also home to the women's figure skating team, which will host an intercollegiate competition this weekend, and the synchronized skating program as well as 43 Intramural Sports broomball teams. It is a popular draw for public skating sessions and area figure skaters as well as a budding youth hockey program.

"This building has the highest utilization on campus and is in use sometimes up to 19 hours a day during the school year," said Lee Beaumont, Liberty's senior vice president for Auxiliary Services.

The arena also serves as the headquarters for the Club Sports department, which will expand from 32 to 35 programs next fall, bringing the total number of student-athletes involved from 532 to close to 600.

"It's amazing, it's awesome, it's grown so much," Handy said. "We're really excited about that."

The renovation will be completed by Lynchburg-based Glass & Associates, Inc., the same company that built the facility. The firm also completed the expansion of the nearby LaHaye Student Union, as well as the Hancock Welcome Center and the basketball indoor practice facility at the Vines Center.

In the renovated facility, spectators will enter through the front door and walk up staircases on either side or take an elevator to the top level concourse before funneling down into the seating areas much like at the Vines Center. There will be a steep, standing-room-only student section overlooking the ice from the main-entrance side, on top of the Pro Shop and figure skating locker room.

"We're trying to do some cool things to enhance the fan experience when they get here," said Dave Semenyna, assistant director of Club Sports.

The only sections of the current structure that will be left intact, besides the NHL regulation 200-by-85-foot ice pad, will be the area behind the back wall where the ice-cleaning machines are stored and the current concessions stand and women's restroom near the main entrance.

In the renovation, two additional concession areas will be constructed on the upstairs level while the weight room and conference room will move to the main floor, where significant upgrades will be made to the athletic training room as well as the locker room facilities, coaches' rooms, and Club Sports offices and newly introduced Varsity Club and Club Sports Hall of Fame.

"With this new facility, we will have eight locker rooms, which will allow us the opportunity to host larger tournaments," Handy said. "The size of our athletic training room is going to be three-and-a-half times the current size."

He said the expanded facility will provide even more opportunities for Liberty students to get real-world experience in a variety of career fields.

"One of the unique aspects of our Club Sports department is there are over 300 students who are getting academic credit for being a part of Club Sports in broadcast journalism, sports management, exercise science, the music department," Handy said.

Beyond the student-athletes' practice and training time, students have logged more than 10,000 academic hours through the Clubs Sports department so far this school year.

Handy thanked President Jerry Falwell and his wife, Becki, who he called the "driving forces behind this facility," along with Beaumont; Club Sports coaches and athletes; and members of Liberty's Planning and Construction team, including Senior Vice President for Construction Planning Charles Spence, Construction Coordinator Alan Askew, and Brad Barber, engineering and design coordinator.

The ice will be available for teams to practice on by Aug. 15, when they arrive for the fall semester, and Liberty will host its first games on Oct. 23.