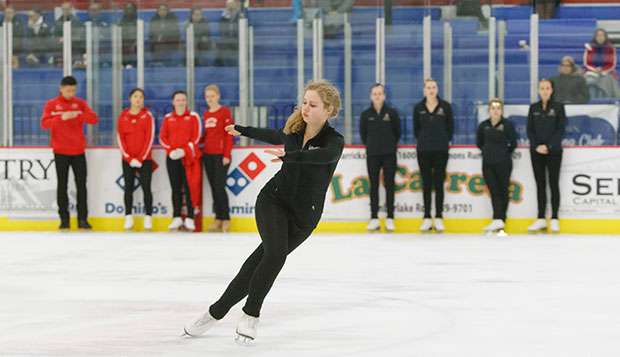 Figure skating fans will have a rare opportunity to witness high-level performances in the sport this weekend when Liberty University hosts its fifth annual spring Intercollegiate Competition at the LaHaye Ice Center.

The Lady Flames will be one of 12 collegiate teams represented and will have nine of a total of 144 Preliminary to Senior-level skaters in the competition that goes from 7 a.m. to 9 p.m. Saturday and 8 a.m. to 1 p.m. Sunday.

Unlike in previous seasons, Liberty enters its home competition having already skated in a sectional event, hosted by Massachusetts Institute of Technology on Feb. 7-8.

"We feel a little more prepared," Lady Flames Head Coach Tatiana Payne said. "As usual, our competition is second in a series of three sectionals and this is the first year we will be going to all three," concluding with the March 21-22 event at the University of Delaware.

As a team, Payne said home-ice advantage will definitely work in Liberty's favor this weekend, after the Lady Flames' struggled on MIT's softer ice surface three weeks ago.

Fantasia Remonvil, who placed fourth out of 12 competitors in the Novice freeskate, freshman Emily Hautbois, who took third out of seven skaters in Group A of the Intermediate freeskate, and junior Emily Boyles, who finished fifth out of 11 participants in the Preliminary Group B, had some of the Lady Flames' best performances at MIT.

She anticipates higher individual scores from most if not all of Liberty's competitors this weekend.

"After the last competition, we saw which areas are strong points and weak points and we hope that we'll see improvement in our scores because we've been working on those things," Payne said. "The biggest advantage for us is we're used to the ice quality (at LaHaye)."

Only the top three scoring teams, based on the average of the three sectional events, will qualify for the U.S. Figure Skating Intercollegiate Nationals, set for April 10-12 at the University of California Berkeley.

Boston University and current points leader Delaware are two of the favorites to make the nationals cut.

Two of Liberty's top skaters to watch are captain Kelly Pollock, a graduate student who competes at the Senior level, and junior Remonvil. Both had to pull out of last year's competition due to injuries.

Pollock will participate in Saturday's opening event, Preliminary Solo Dance, and will be Liberty's only competitor on Sunday, for the Senior freeskate from 8:30 to 10 a.m.

Boyles, junior Laura Gordon, and sophomore Katie Proia will participate in the Preliminary freeskate session at around 3 p.m. before sophomores Rebekah Hicks and Maria DeFosse compete in the Pre-Juvenile freeskate at 3:50 p.m.

"Realistically, I'm not sure what to expect," Payne said. "Based on their ability, everybody has the potential to place. It's just a matter of how everybody else does."