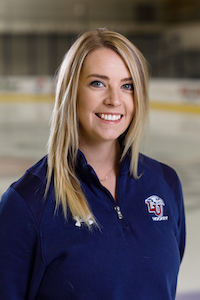 Coach Pinel (Fischer) joins the coaching staff for her third year, following a successful playing career at Liberty.  Pinel (Irma, Alberta) played four and a half seasons for the Flames (2011-2016) while studying at LU. During her playing career, Pinel attended five National Tournaments finishing with four top-3 finishes including the Flames first National Championship in 2015.  Pinel received all tournament recognition as a Defenseman in 2015. She is passionate about hockey and has previous coaching experience with the Lynchburg Youth Hockey Association since 2011.

Coach Pinel resides in Lynchburg with her husband, Matt (WD1 Goalie Coach).  She currently works in Liberty's IT department and recently completed her MBA.