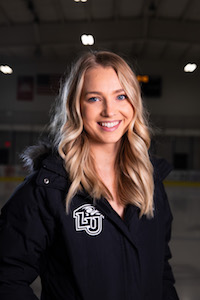 Emily Hughes first began serving on the coaching staff of Liberty University’s Synchronized Skating team in July of 2016. She is a USFSA double gold medalist in Moves in the Field & Free Skate. Emily has over thirteen years of competitive experience. She is a Team USA alumnus from Team Braemar’s Junior Synchronized Skating team. She skated with Team Braemar as they took the National title at the 2014 United Skates Synchronized Skating Junior National Championships and competed internationally in Rouen, France during the 2014 French Cup. She has also competed in the Senior Ladies division on the state and regional level. She is a native to Elk River, Minnesota and grew up training primarily with the Elk River Figure Skating Club, the Skating Club of Bloomington, and the Braemar City of Lakes Figure Skating Club. She is a professional member of U.S. Figure Skating, the Professional Skaters Association, is a registered CER Category A credentialed coach, and is SafeSport compliant.

Emily worked with Liberty’s Synchronized Skating team as they advanced into the Collegiate division in 2017. She has helped the team prepare for their three consecutive performances at the United States Synchronized Skating National Championships. Emily also serves as the co-director with Dawn Harter for Liberty University’s Learn to Skate program.

Emily resides in Lynchburg, VA with her husband, Ben Hughes.