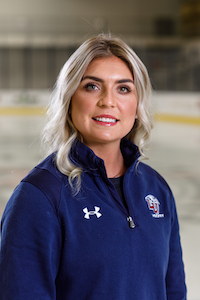 Coach Carlson (Kenny Lake, Alaska) is entering her third season as assistant coach for the Flames. Carlson grew up playing competitive hockey in her home state of Alaska before attending Robert Morris University (PA) where she played 4 years at the NCAA D1 level.  She also played NCAA volleyball at RMU for one year following her hockey career.
Coach Carlson has a passion for coaching and has been involved with camps/clinics for a number of years, including as an on-ice instructor with Hockey Ministries International (HMI) for many Summers.
Carlson comes from a large family - 6 siblings - Leah came to Liberty and was joined by her brother and her new sister- in- law.
Coach Carlson graduated this past year with her Masters of Public Health in Nutrition at Liberty. She will also be teaching at a yoga studio in Lynchburg.