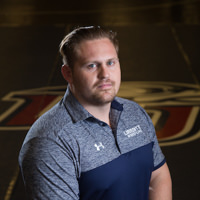 Joshua Travers enters his second season coaching with the Flames and was an integral part of the formation of the women's team, helping coach their first National Champion. Joshua came to the Liberty Flames after serving as a United States Marine. He was a 2016 All American Heavyweight and a 3x National Qualifier during his 4 years wrestling for Coach Castro and the Liberty Flames. Joshua studied Government, Spanish, and Criminal Justice in his undergrad at LU. He is currently pursuing his Masters in Religion from LU.