Liberty to host Davenport in Blue and Gray Cup this weekend 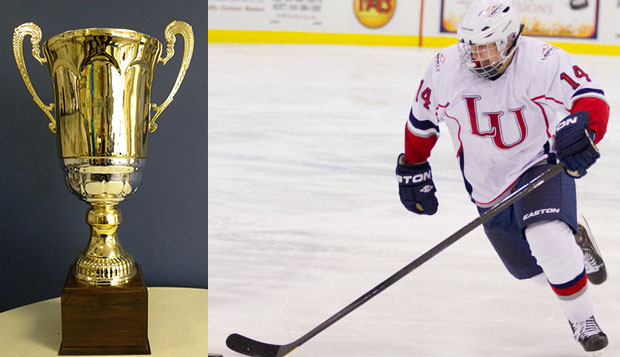 The Liberty Flames Division I men's hockey team returns to the LaHaye Ice Center after two weeks on the road as they host the Davenport University Panthers (4-3) for a two-game series Oct. 19-20. This series will debut a new trophy, "The Blue and Gray Cup," which the two schools will compete for annually. The winner of the best of three games this season will be awarded the cup at the final match-up in Davenport, Mich., on Nov. 29.

The Blue and Gray Cup was created to not only celebrate the rivalry between the two schools, but to also commemorate the sesquicentennial of the Civil War, where units from Michigan and Virginia fought on the same battlefield.

The battle now shifts from the field to the ice between these longtime rivals. The teams have faced off numerous times dating back to when both schools competed in the American Collegiate Hockey Association's (ACHA) Division II.

A Civil War-era color guard featuring both Union and Confederate States of America flags will be present during opening ceremonies both nights, and Bruce B. Butgereit, Commander of the Michigan Commandery of the Military Order of the Loyal Legion of the United States, will introduce the cup.

Matchup: The Liberty Flames (8-3) face off with the Davenport Panthers (4-3) Friday at 7 p.m. in the LaHaye Ice Center, the first of three meetings for the season.

Scouting Liberty: Liberty finished 0-3 at the ACHA Showcase, outscored 15-8 over the three games. Luke Baumgarten led Liberty with three goals on the weekend, while leading scorers Rick Turner and Lindsay Leblanc were held to one goal each. Clayton Brown suffered his first loss of the season in the net for the Flames when they faced Oklahoma on Oct. 5 to open the showcase.

Scouting Davenport: The Panthers come in on a three-game losing streak after losing to Illinois to close out the ACHA Showcase and losing a pair to Robert Morris (Ill.) 5-1 and 6-2, respectively. Sophomore Robert Kleiman leads the Panthers in total points (12) and is tied for the team lead in goals with Dan Zawacki and Phil Wendecker (4). Junior Phil Graveline leads the way in net, sporting a 3-1 record and 2.66 goals against average.

Previous Matchups: Last season, the two teams split their four games, with the road team sweeping in each series (Liberty winning 4-3 and 7-4 in Michigan and Davenport outscoring the Flames 4-3 and 4-2 in Lynchburg).

All Time Series: This is the 18th overall meeting between Liberty and Davenport, with the series tied 8-8 with one tie.